Sail alongside the city’s massive walls and enjoy the Old City view from the sea.
The sea route is a short cruise departing from the port of Akko and along the outer sea city wall

1 The Island of Flies

During the Crusader period, Akko was mistakenly identified as the city of Ekron, one of the Philistine cities whose main god was ‘Beelzebub’.

The full name of Akko in the Crusader period was: The city of St. John of Acre, and in French, the language of most Crusaders, Saint Jean d’Acre. John is an ancient Christian Saint who was later identified with John the Baptist, the Saint of the Order of the Hospitallers, who was most dominant in the city, as evidenced by the remains of the Knights’ Halls.

Akko reflects the inter-relation of the country with the wide world beyond the sea. It has been the gate to Israel and the whole continent of Asia as well as the goal of long caravan routes, which led from the ends of the then known world to Akko, hence they continued west by sea.

Akko was founded in the Bronze Age, the second millennium BCE on the hill later called Napoleon’s hill to the east of the present city. The first harbor was in the river Naaman flowing to the south of the city. During the centuries the river has changed its course many times and flows to the sea now in a man-made channel.

In an underwater survey carried on here during the 1960’s before the construction of the present breakwater, the sophisticated Phoenician method of port building came to light. The Tower of Flies was raised pyramid-like from a sunken ridge in the bay, serving as an emporium for anchorage, loading and storage of goods from distant lands. A breakwater was raised by laying regular courses of hewn stones underwater, eastward from the head of the peninsula where the present lighthouse now stands. Its length was about 300 meters and its width about 12 meters and its remanence can still be discerned under the new construction. It was provided with regular openings, which let the sea currents in to clean the port naturally, thus preventing the need for dredging, necessary today.

The port reached the height of its activity during the Crusader period. This fact is well expressed by the travels of Marco Polo at the end of the 13th century. Like many other Venetians his father and uncle also heard the stories of merchants and travelers and used the accumulated experience in their pioneering venture into the Far East.

Marco Polo’s name is now part of the urban layout of Akko, although he only passed here on his way. During this period, the 2nd Century of Crusader rule in this country, Akko was without a doubt one of the most important ports all around the world.

With the founding of the new city of ‘Ptolemais’ by Ptolemy II in the second half of the third century BCE, the process of abandoning ‘Tel Akko’ and moving the city to the plains west of the tell was completed. During this period (the Hellenistic period), a breakwater was built that turned the northern end of the bay, east of the peninsula, into a protected port. Akko has become an international port and trading city in the eastern basin of the Mediterranean Sea. The breakwater that began here, and its remains are still visible as a row of rocks in front of the Doniana restaurant, continues east along the current pier and was covered in modern times (British Mandate and State of Israel) with a modern pier. At the eastern end of the Hellenistic pier a tower was built which marked the western entrance to the port. East of it was built the ‘Tower of the Flies’ which marked the eastern entrance to the harbor. This port has been used by Akko throughout history to the present day, the remains of the arched buildings that are seen in front of the restaurant and at sea are the remains of warehouse buildings that were at the rear of the port in the Ottoman period. During the Crusader period this area was within the boundaries of the Pisan Quarter. 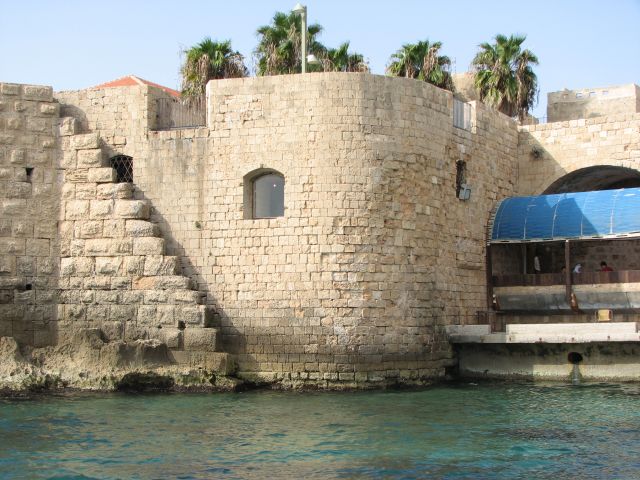 The Akko Lighthouse stands on a tower, Burj El-Sanjak, in the southwest corner of the Old City, and serves as a navigation and warning sign for ships approaching the city in the dark from the west. This lighthouse was probably built in 1912 by French engineers, after the previous lighthouse built in 1864 was damaged by sea storms and stood on the edge of the lagoon to the north. The current lighthouse is operated under the responsibility of the Ministry of Transport.

The description of the quarter by the secretary of the head of the Order reads: “It was the most fortified place in the city and occupied a large area on the beach. At its entrances stood a tall and very strong tower, and its walls were very strong (28 feet thick), on each side of the citadel was a small tower, and on each tower stood a statue of a mighty lion. The whole is gold plated”. The remains of this Templar fortress were preserved until the 18th century, when Daher al-Omar, ruler of Akko in 1750-1775, destroyed the fortress and used its stones to build the sea walls of Old Akko. North of the fortress, at the northern end of the lagoon, was built a round tower, the treasury tower of the Templar Order. The members of the Order who were brave knights, who protected the pilgrims and their property on their way to Jerusalem, were also considered the first bankers in history. They were privileged to amass a particularly high fortune kept in this place. The Templar Fortress was the last stronghold to fall to the Mamluks in 1291. The fall of the fortress symbolizes the end of the Crusader kingdom in the Holy Land.

During the Ottoman rule there was a separation between the urban civilian area of ​​the city and the area of ​​the walls and port which was an Ottoman military territory. Citizens were not allowed to approach this area. For this purpose, were built control gates, through which only the Ottoman garrison was given access to the walls.

The Al-Jazzar wall was built in the first half of the 19th century by Al-Jazzar and his successors and after the city walls were destroyed by the Napoleon siege in 1799. These walls were designed to protect the city against the heavy artillery shelling that came into use in those years. Therefore, the wall is very wide and many cannons are placed on it, designed to fight back and keep the armies away from trying to approach the city and bring down its walls. The city walls are also surrounded by a deep moat and a strong outer wall, to which were added external earthworks that prevented damage and destruction of the walls by direct cannons hit

Here we see a defense tower in the northwestern corner of the walls of Old Akko from the Ottoman period. This tower was built outside the city walls in an octagonal shape so that on our left there is a view to the south in direction of the western sea wall, and to the east a view of the northern mainland wall. Accordingly, surfaces were prepared in the tower for cannon positions that were placed on the site and could protect attempts to break through the wall from the west or north from the mainland.

This tower is a tower built with the construction of the new walls after the siege of Napoleon in 1799. The new walls were built by Al-Jazzar and his successors in the early 19th century. Burj al-Karim is located on the foundations of a round tower built on the site during the Crusader period in the 12th century. The Crusader tower marked the northwestern end of the city walls. Since during the Crusader period the Muslim navy did not have warships in the Mediterranean that could endanger Akko from the sea, no sea wall was built in the western part of the city.

The Old City was founded in the Hellenistic period in the second half of the third century BC by the second Ptolemy ruler who then ruled the Land of Israel. The city limits in the Hellenistic, Roman and Byzantine periods from the third century BCE to the seventh century AD were much wider than the boundaries of the Old City today but no remnant remains of the city walls during these periods. With the Muslim conquest of the country in 628 AD, the city was destroyed and its status as an international trading city in the eastern basin of the Mediterranean declined. Akko was a small fishing village located on the peninsula near the port. During the reign of Ibn Tulun the Egyptian ruler who took over the Land of Israel and Syria (883-835). He rebuilt the line of coastal fortifications to prevent the invasion of the Byzantine navy into the country. Ibn Tulun restored Akko as a strategic port city and renovated the port and city walls. The walls of Ibn Tulun surrounded the Old City within the borders of the peninsula and thus set the boundaries of Old Akko for future generations. The Crusaders with the conquest of Akko from the Muslims in 1104, fortified the city walls along the line of the existing wall, a wall that protected the city during the 12th century, until the Battle of Karnei Hittin and the Crusaders’ fall in 1187. During the 13th century the city expanded beyond its northern walls, a new Crusader quarter (‘Montmusard’) was built and a new wall line was built surrounding the new quarter. The wall line from the days of Ibn Tulun remains an internal wall line. 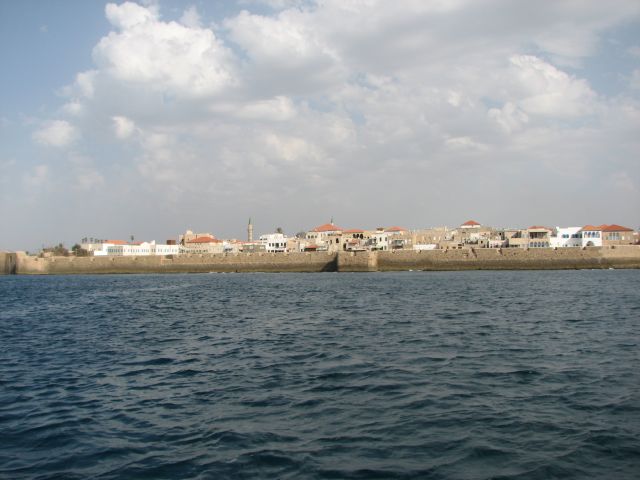 In 1291 with the conquest of Crusader Akko by a Mamluk army coming from Egypt, the city was demolished, and its walls destroyed, and only the port area continued to function as a commercial port for exporting goods from the Galilee region. Daher al-Omar (1750-1775), a local Bedouin ruler, took over trade from the Galilee and the Golan Heights vis-à-vis European countries. He created his own independent kingdom and in 1745 established the capital of the Galilee kingdom in Akko. Daher rebuilt its walls and strengthened urban settlement within it. The new city walls, which included a wall and a moat, renewed the wall lines from the ninth century of Ivan Toulon that were also used by the Crusader city in the 12th century. In 1799 during the Napoleon’s siege, parts of this wall were destroyed, mainly in the northeastern corner of the city by heavy shelling of Napoleon’s cannons. Napoleon at the end of a long siege of many weeks failed to conquer Acre and retreated back to Egypt.

Al-Jazzar, ruler of the city, and its successors, understood that the city walls in their current form will not protect it from heavy cannons that entered the battle during this period and surrounded the city with a huge new double wall that sometimes reaches 60 meters wide. The wall incorporates dozens of cannon positions and corner towers that protect it, as well as secret passages (posterns) that allowed for strategic assistance during the siege of the city.